Shawneen Finnegan and spent the weekend of 8-10 April birding in and around Pacific City, Tillamoook County. Friday we surveyed the white-cheeked geese in various pastures along the Little Nestucca River and the lower Nestucca River, including the Nestucca Bay NWR. Before heading out to lead trips for the Pacific City Birding and Blues Festival on Saturday morning, we checked Haystack Rock off Cape Kiwanda at the north end of Pacific City. Later in the day we led two short walks at the Whalen Island/Clay Myers State Natural Area at Sand Lake. The weather was pretty bleak when we awoke Sunday. Since we didn't have a walk to lead, we decided to spend some time photographing Aleutian Cackling Geese at Woods County Park/Martella Dairy just n. of Pacific City. These flocks include the entire population of Aleutian Cackling Goose that breed in the Semidi Islands. This flock returns to this pasture each winter, feeding in the pastures by day and roosting on Haystack Rock at night. I hadn't seen these birds before, so it was fun to see them close-up and compare them to the dozens of typical Aleutians that were also present (see photos). 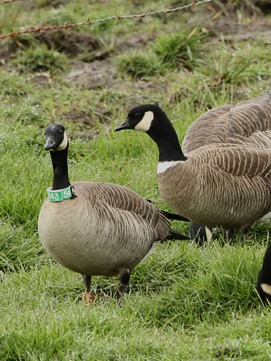 This image shows nice comparison between a Semidi Islands Aleutian Cackling Goose (with green neck collar) and a typical Aleutian Cackling Goose. We noted a few differences that seem to be consistently apparent. The Semidi Island birds generally appeared to have shorter legs, be less scaly looking below and their foreheads were less pronounced. Additionally, they showed much thinner white collars at the base of the black "neck sock" and many presumed Semidis showed no white at all at the base of the neck. 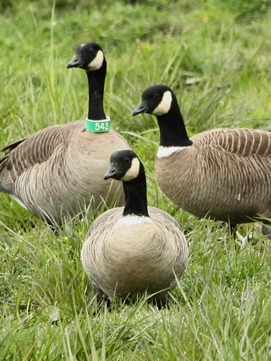 The back left bird in this image (with green neck collar) is one of the Aleutian Cackling Geese that breeds on the Semidi Islands. The entire population from these islands winters in a single pasture near Pacific City, Tillamook Co., Oregon. At night they fly just offshore to roost on Haystack Rock at Cape Kiwanda. The right hand bird is a typical Aleutian Cackling Goose, most of which winter in California's Central Valley. During spring migration, northbound flocks Aleutians stop to feed in in the Nestucca River pasturelands before making an open ocean flight on to the Aleutian Islands. Only a few non-Semidi Aleutians winter in this area. The very pale bird in the foreground has the head shape of a typical Aleutian, but it was paler than most of the regular Aleutians that we saw.